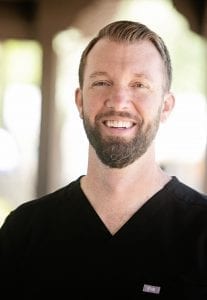 Dr. Derrick C. Call was born and raised in Salt Lake City, UT. In 2006, he earned a Bachelor’s degree in Chemical Engineering and a minor in Chemistry at the University of Utah. Afterwards, Dr. Call attended the Goldman School of Dental Medicine at Boston University from 2008 to 2012 as a recipient of the Health Professions Scholarship Program from the US Navy.

Dr. Call was commissioned as a Lieutenant in the Dental Corps of the US Navy on May 22, 2012 and following his military officer training, reported to Camp Pendleton, CA. During his first year he completed an Advanced Education in General Dentistry residency where he expanded his surgical and general dental abilities. He participated in multiple field exercises with the Marines he was stationed alongside and subsequently achieved his Fleet Marine Force Officer Warfare Qualification. Dr. Call also earned the Navy and Marine Corps Achievement Medal and additional medals for expert pistol and rifle marksmanship.

In the Summer of 2015, he accepted orders to serve at the Makalapa Naval Dental Clinic in Pearl Harbor, Hawaii. After his first year, Dr. Call was selected by the Commanding Officer to direct 2 additional dental clinics on the island, first the Wahiawa Naval Dental Clinic, and second, the Camp Smith Marine Corps Base Dental Clinic which provided services for the Commanding Generals and Admirals for the pacific region. It was during this time that Dr. Call was selected for promotion to Lieutenant Commander and awarded the Navy and Marine Corps Commendation Medal.

In 2018, following his six joyful years serving in the military, Dr. Call and his family decided to open a new chapter in their life. He bought a home back in Oceanside and began working in private practice. Dr. Call is husband to a lovely, talented wife, Melinda, and father of 3 fun children, Annie, Henry, and George. He enjoys basketball, bicycles and motorcycles, piano, shooting, hiking, swimming, and goofing off with his kids.

Want To Schedule An Appointment?

Fill Out our Appointment Request Form