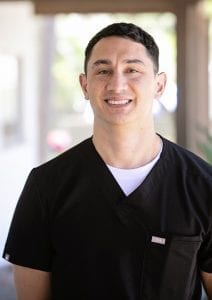 Dr. Christopher McLellan is originally from Brick, New Jersey. He received his bachelor of Science in Biology from the College of New Jersey in 2007. He holds a Doctor of Medicine in Dentistry degree from Rutgers Dental School, graduating in 2012 with Honors.

Dr. McLellan was accepted into the United States Navy Health Professions Scholarship Program, and was commissioned a Dental Corps Officer in 2008. After graduating dental school, he was stationed in Camp Pendleton, CA as a member of 1st Dental Battalion. He completed the Advanced Education in General Dentistry (AEGD) program in 2013, where he enhanced his dental training in endodontics, oral surgery, implant dentistry, and restorative dentistry. Dr. McLellan then served as the dental officer for the 1st and 4th Marine Regiments.

From there, he was assigned to United States Naval Hospital Yokosuka, Japan where he served as the dental officer for sailors from the Carrier Strike Group that deploys with the USS Ronald Reagan. After two memorable years living and working in Japan, Dr. McLellan returned to San Diego where he served as the dental officer at Marine Corps Air Station, Miramar. During this tour, Dr. McLellan was promoted to the rank of Lieutenant Commander, and awarded with his third Navy and Marine Corps Achievement Medal.

After separating from his duty with the Navy, Dr. McLellan was hired here at Smile Shoppe. We are pleased to add his knowledge, experience, and kind, friendly demeanor to our team!

During his free time, Dr. McLellan enjoys golfing, hiking, surfing, and he’s working on improving his photography skills. His time in military service also made him love to travel abroad and experience different cultures.

Want To Schedule An Appointment?

Fill Out our Appointment Request Form